The European Federation for Medicinal Chemistry (EFMC) has announced – March 2021 – that the late Prof. Wijbe Nauta (1923-1986), the Nauta Foundation carries his name, has been nominated posthumously as honorary fellow of the EFMC and has published the following consideration:

Prof. Wijbe Nauta (1923-1986) was one of the founding fathers of the EFMC. He was Secretary in the early years of EFMC, playing a key role in the internationalization of the first national organizations and promoting medicinal chemistry as an independent chemical discipline, especially characterised by its interdisciplinary nature. As member of the UPAC’s commission on medicinal chemistry, part of the Division of Organic Chemistry, Prof. Nauta promoted EFMC through his contributions to the IUPAC Medicinal Chemistry Newsletter. Importantly, he took the initiative to organize the fourth ISMC in 1974. The logo designed for this symposium became the EFMC logo later on: the Aesculapius as an Erlenmeyer. He also initiated the book series Pharmacochemistry Library (Elsevier), of which more than 35 volumes were published, being the first editor of this series. The EFMC Pharmacochemistry Award for medicinal chemistry and chemical biology carries his name. Prof. Nauta kept a large amount of documentation regarding the first years of the Federation, which are now in the archives of EFMC.

The Executive Board of the VU appoints Gregg Siegal as professor of the Biophysical techniques for drug discovery chair, starting 1 April 2018.

The chair focuses on the use of modern sensitive technologies to detect, characterize and solve three dimensional structures of organic molecules interacting with pharmaceutical targets. Part of the aim is to enhance the interaction between academic and industrial efforts to discover novel drugs to benefit unmet medical needs. In addition, the chair should complement the expertise in the O|2 lab building.

Gregg Siegal is the co-founder and CEO of ZoBio, a Leiden, NL based company that develops and offers new solutions to small molecule drug discovery challenges. Beginning in his previous academic appointment, Siegal has developed NMR methods for screening collections of compounds for selective binding to a desired protein and determining the 3-dimensional structure of such complexes. More recently, ZoBio is pioneering high throughput protein engineering technologies. The goal of these efforts is to make the early stages of small molecule drug discovery faster and more successful.

The aim of the appointment that has been made possible by the foundation “Professor Doctor W.Th.Nauta Fonds” is to intensify the interaction between the research into drug discovery at the VU and industry. Professor Siegal already participates in the Marie Skłodowska-Curie Action Fragnet (http://fragnet.eu), coordinated by the Division of Medicinal Chemistry, VU. In addition, by providing strategic guidance to Ph.D. students and collaborating on grant driven research projects, industry developed technology can move to academia and students will obtain a more complete education and be better equipped to contribute to developing new medications.

Siegal received his Ph.D. from the University of Rochester (NY, USA) in DNA replication studies. Subsequently he post-Doc’ed with Prof. Kurt Wüthrich at the ETH (Zürich,CH) and the Ludwig Institute for Cancer Research, where he began studies in biophysics based drug discovery. Siegal then moved to Leiden University where he received a fellowship from the Dutch Royal Scientific Society to build a research group. He was later appointed an assistant professor in the Leiden Institute of Chemistry (LIC) where his research group was active in developing new technologies and applying them to create new novel drugs. He subsequently left the LIC to focus on leading ZoBio.

From 28 through 30 August 2018, Professor Tracy Handel, (Skaggs School of Pharmacy of UC San Diego (USA)taught Nauta Master Classes  under the title Structural Biology of Chemokines and their Receptors dealing with dealing with topics as  Biophysical studies of membrane protein structure and activation and Choosing  a partner-interaction of chemokines with receptors vs glycoaminoglycans. About 60 participants – of which 25%  came from institutions other than the VU University – attended the classes. Tracy Handel  presented also the Nauta Lecture 2018:  What structure tells us about chemokine receptor activity and inhibition.
Both in the master classes and  the Nauta lecture the role of GPCR’s in the mechanism of chemokines were discussed, thereby focussing  on the need of interdisciplinary approaches in processes of identifying new targets for potential candidates for being developed into new medicines. 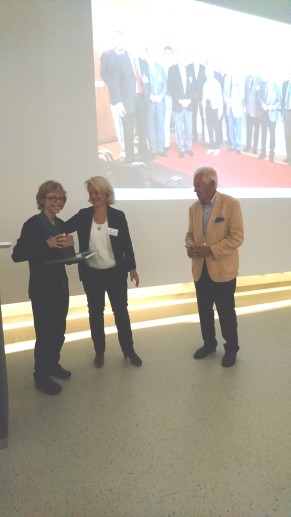 On both photo’s Prof. Tracy Handel -at the left- togetherwith prof.Martine Smit- who coordinated the  classes- and prof. Henk Timmerman, chairman of the Nauta Foundation

If you wish to enquire further information regarding the Nauta foundation please send an email to administratornauta@ziggo.nl